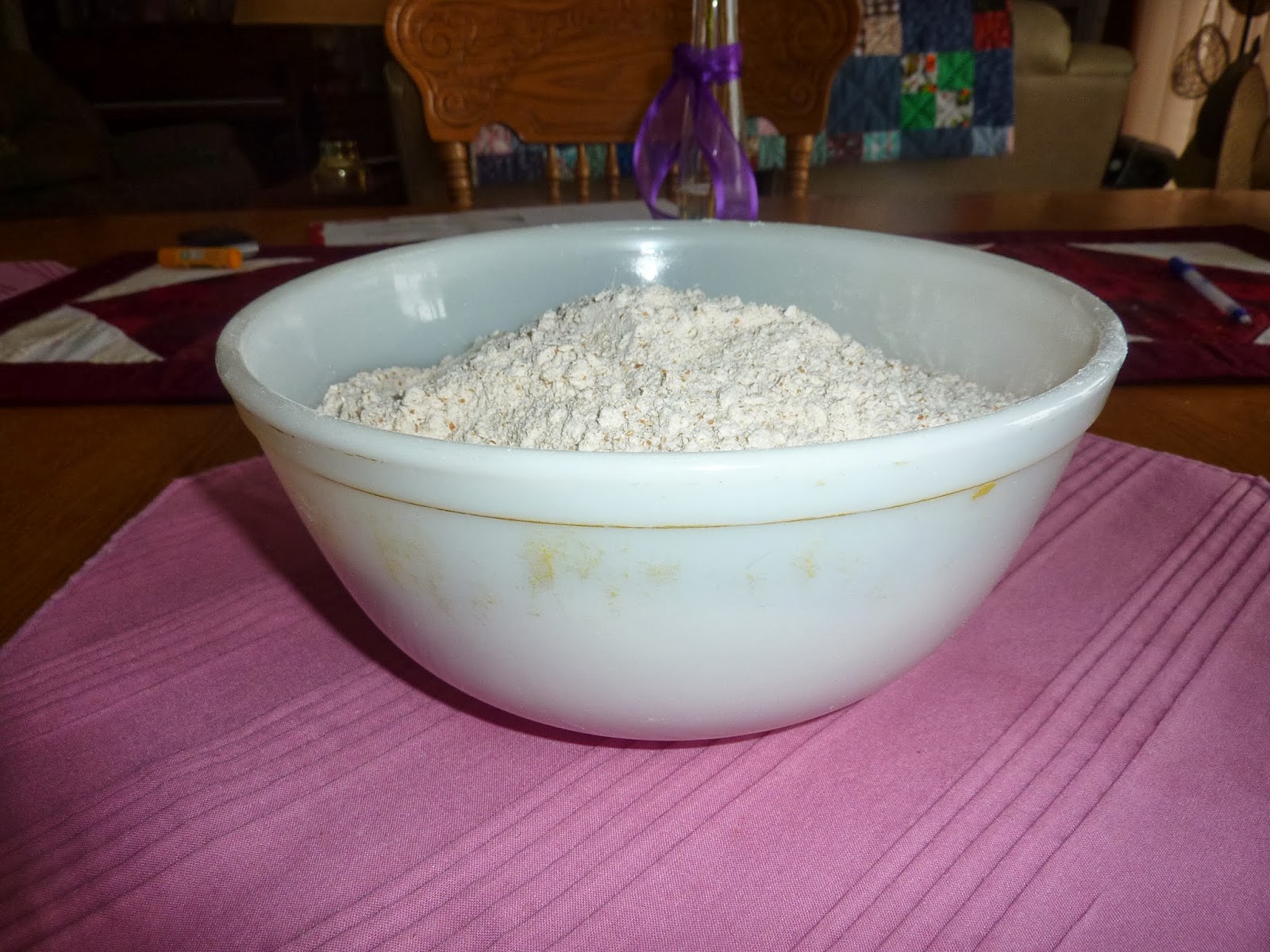 I decided to make up a muffin mix to try.  This is only a half recipe of it. 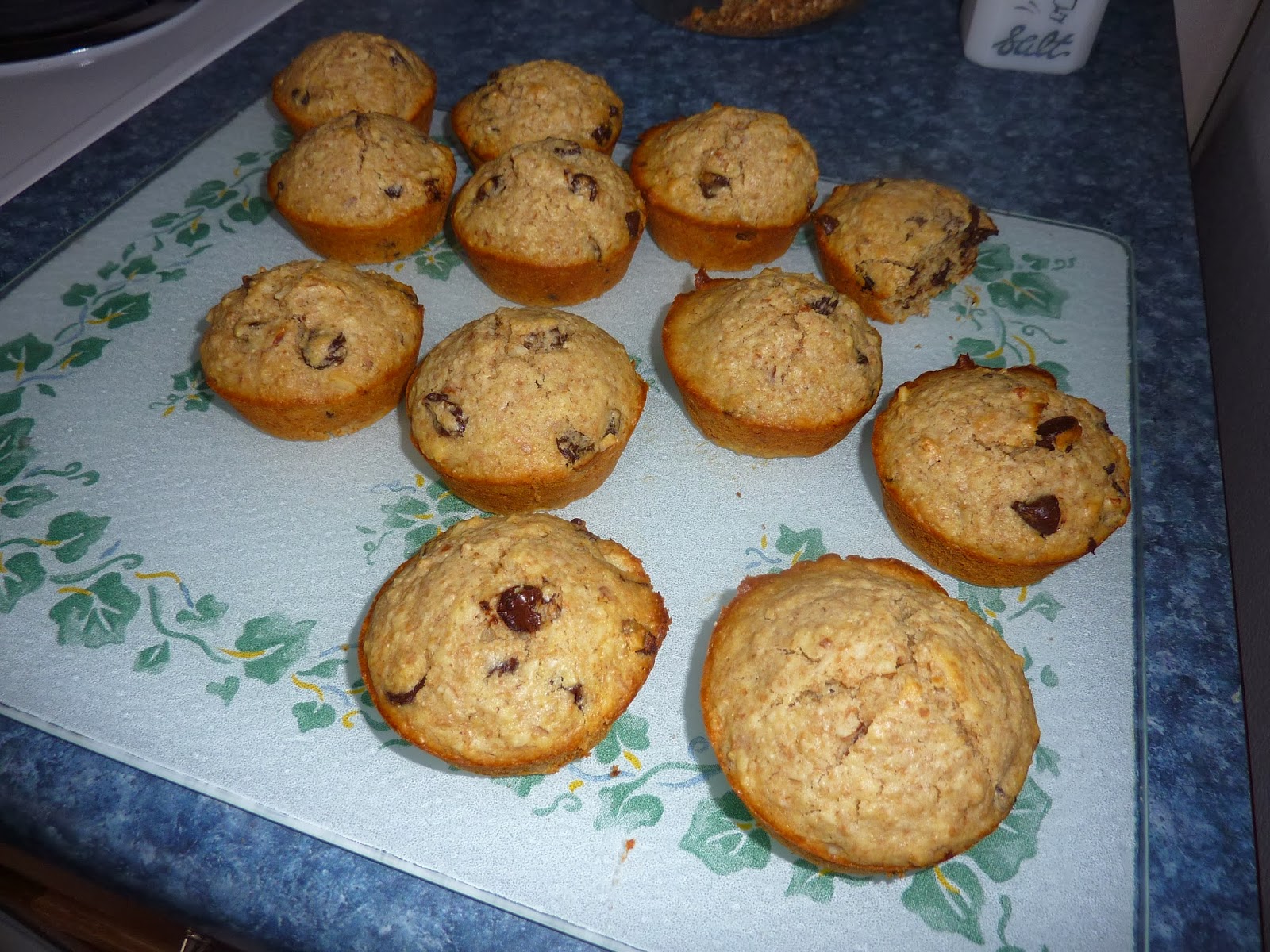 They looked okay but were too dry.  I will use up the rest of the mix but won't be making any more. 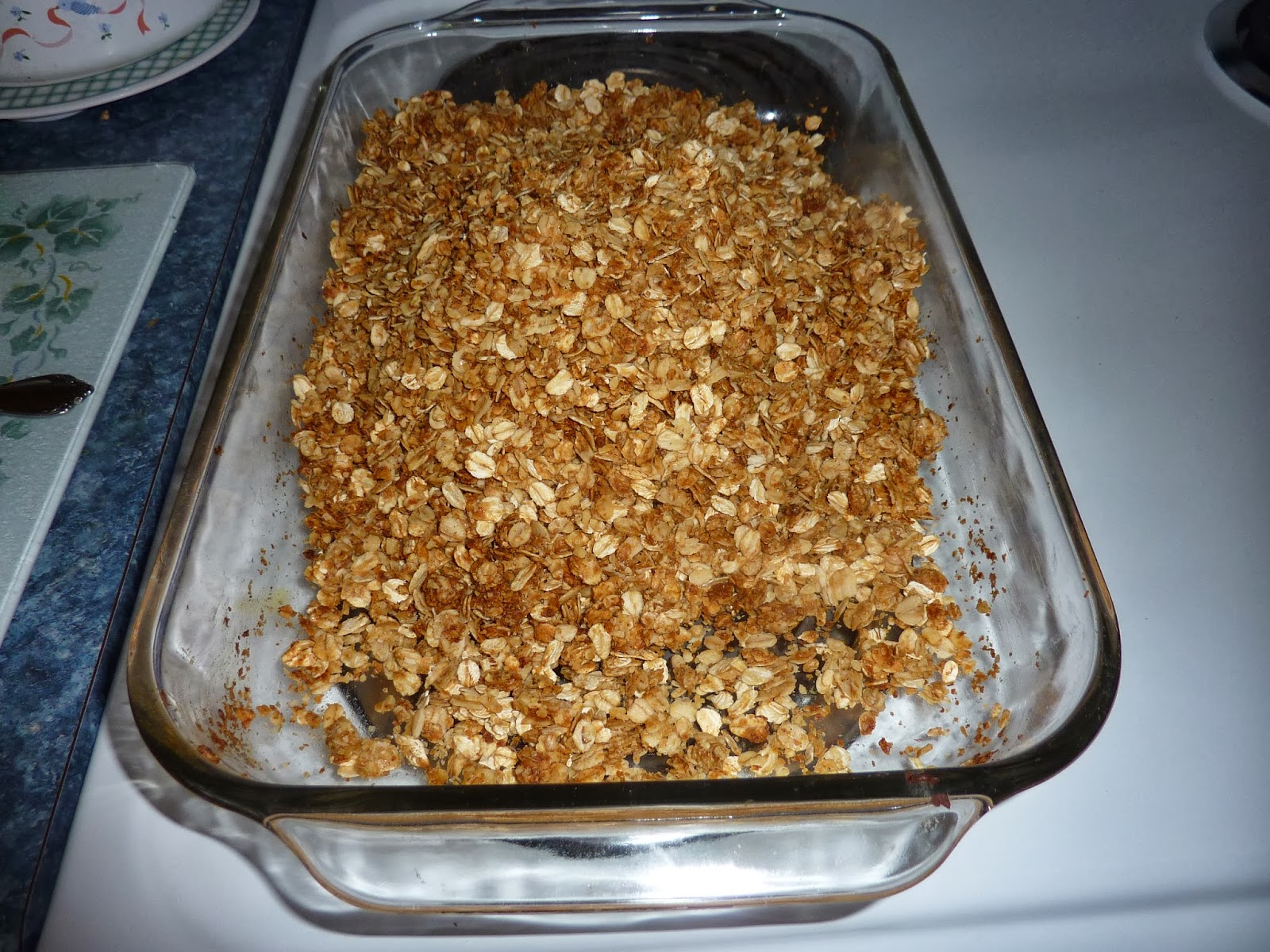 I also made up a batch of granola.  I add raisins, cut up dehydrated apples and of course chocolate chips when I eat it. 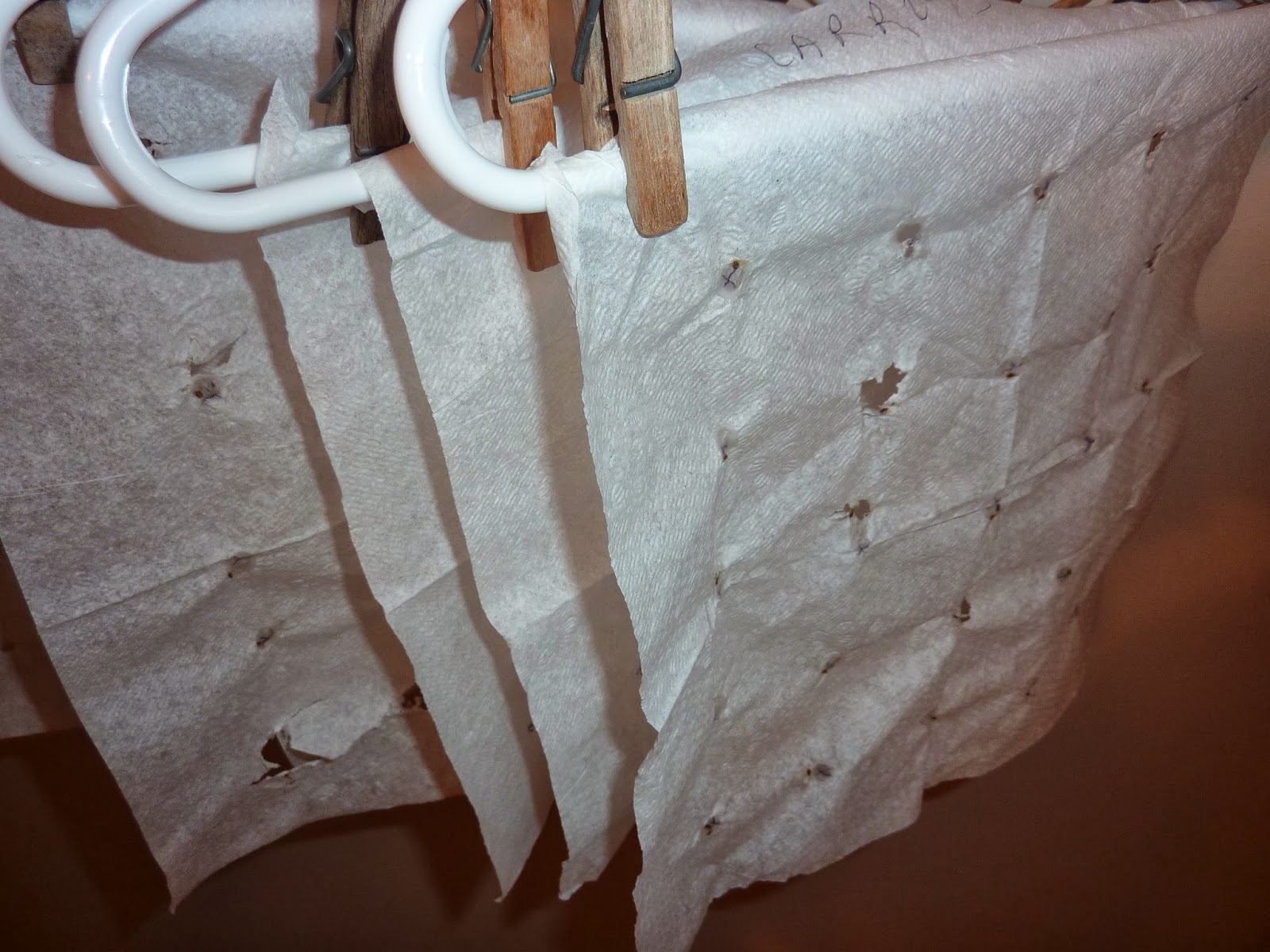 My first time doing this but I thought I would make up some carrot seed tapes for my boxes on the deck.  I used cheap napkins because they are about the width of the boxes.  Everything would have been fine if I had not laid them down on paper before they were dry.  As you can see they stuck to the paper and what a mess getting them separated from the paper and thus the holes.  You would have thought I would have known better!  LOL  I do hope they will germinate and grow in spite of me! 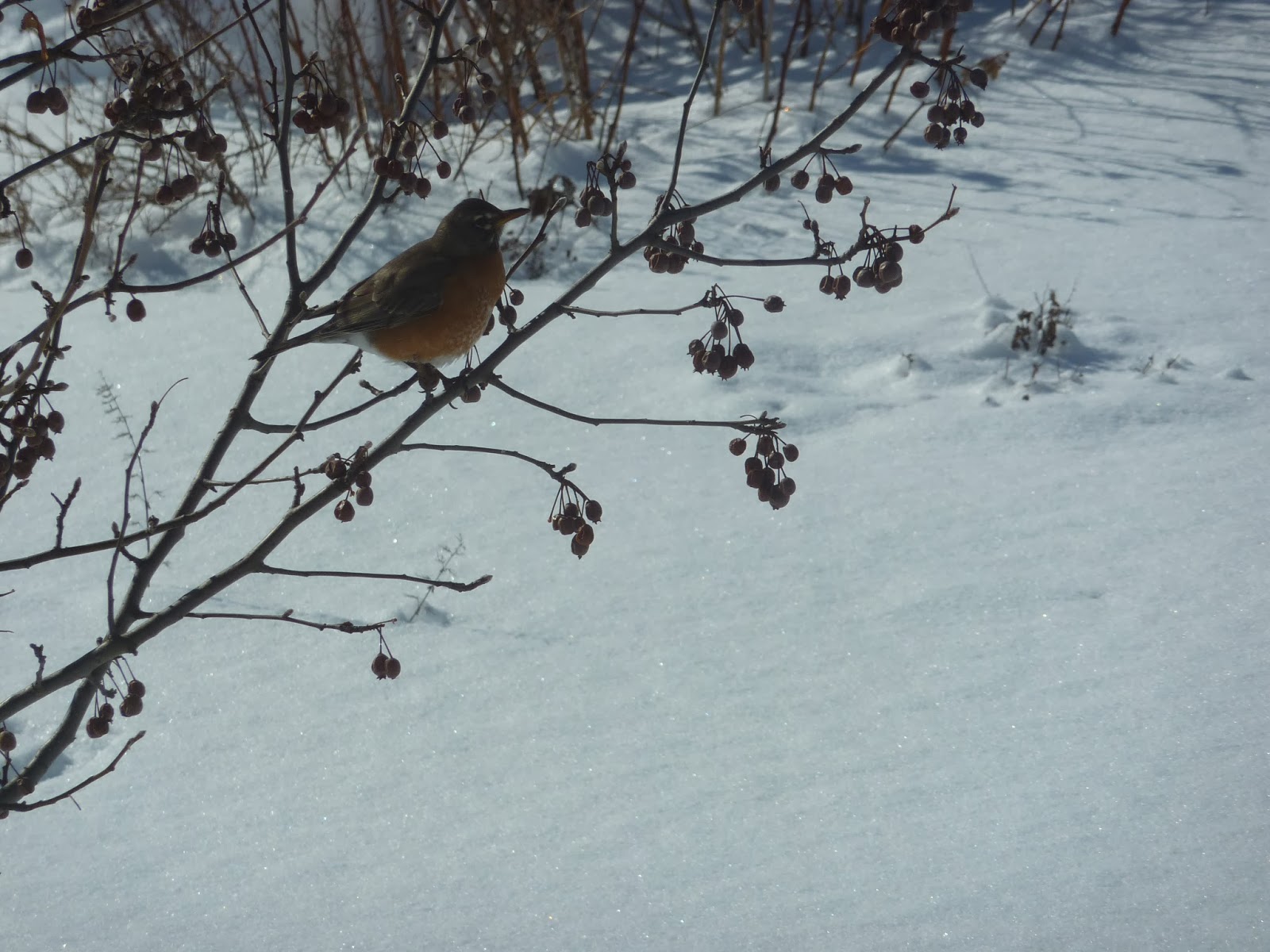 I saw this bird in the chandelier ornamental pear tree by the deck.  At first I thought Robin!!!!!!  But if it is a Robin he has got to be lost being here this time of year with all the cold and snow! 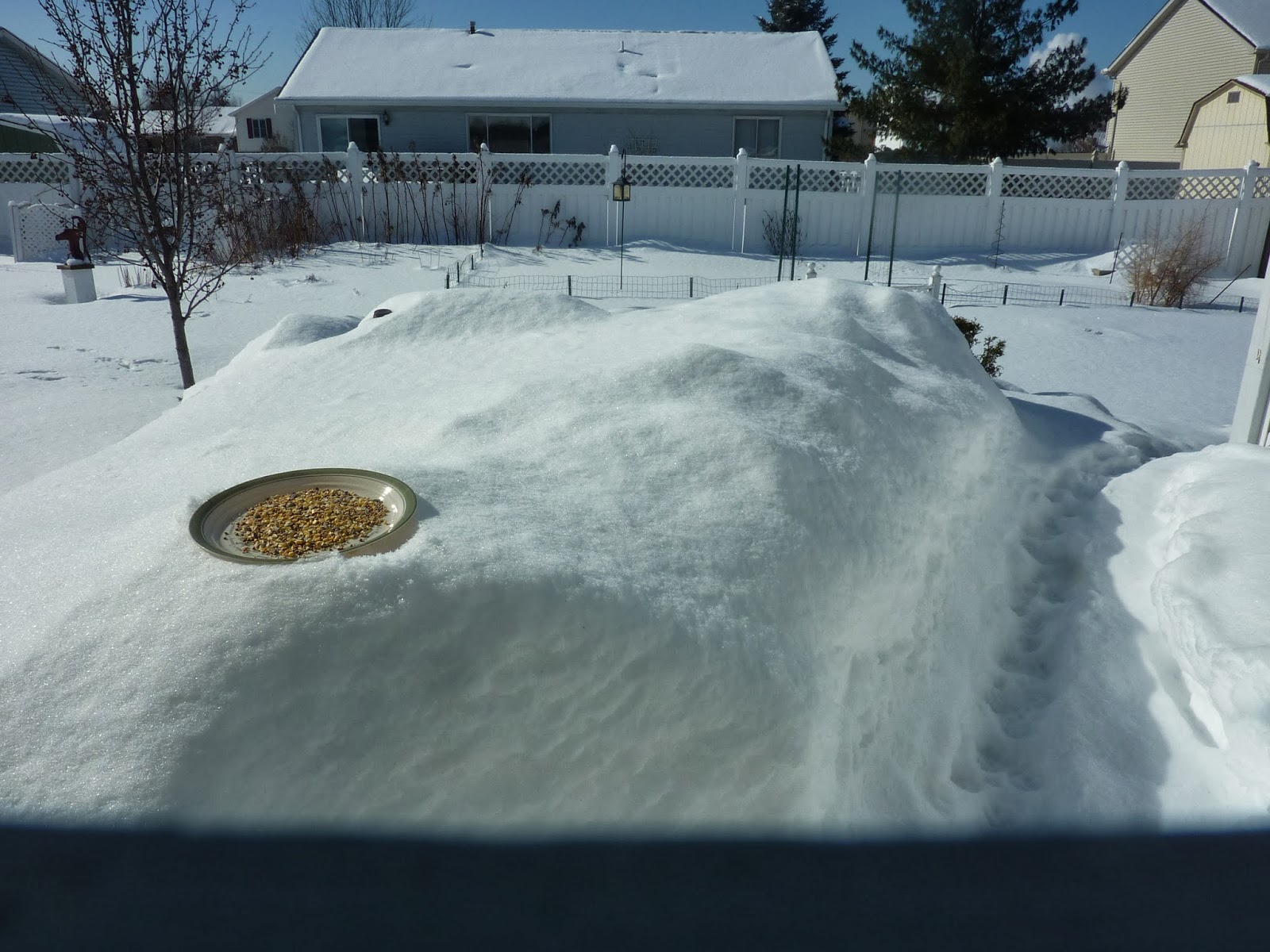 I am guilty of not wading through the snow to put bird seed in the bird feeder!  So I set a plant of seed out on the deck for it. 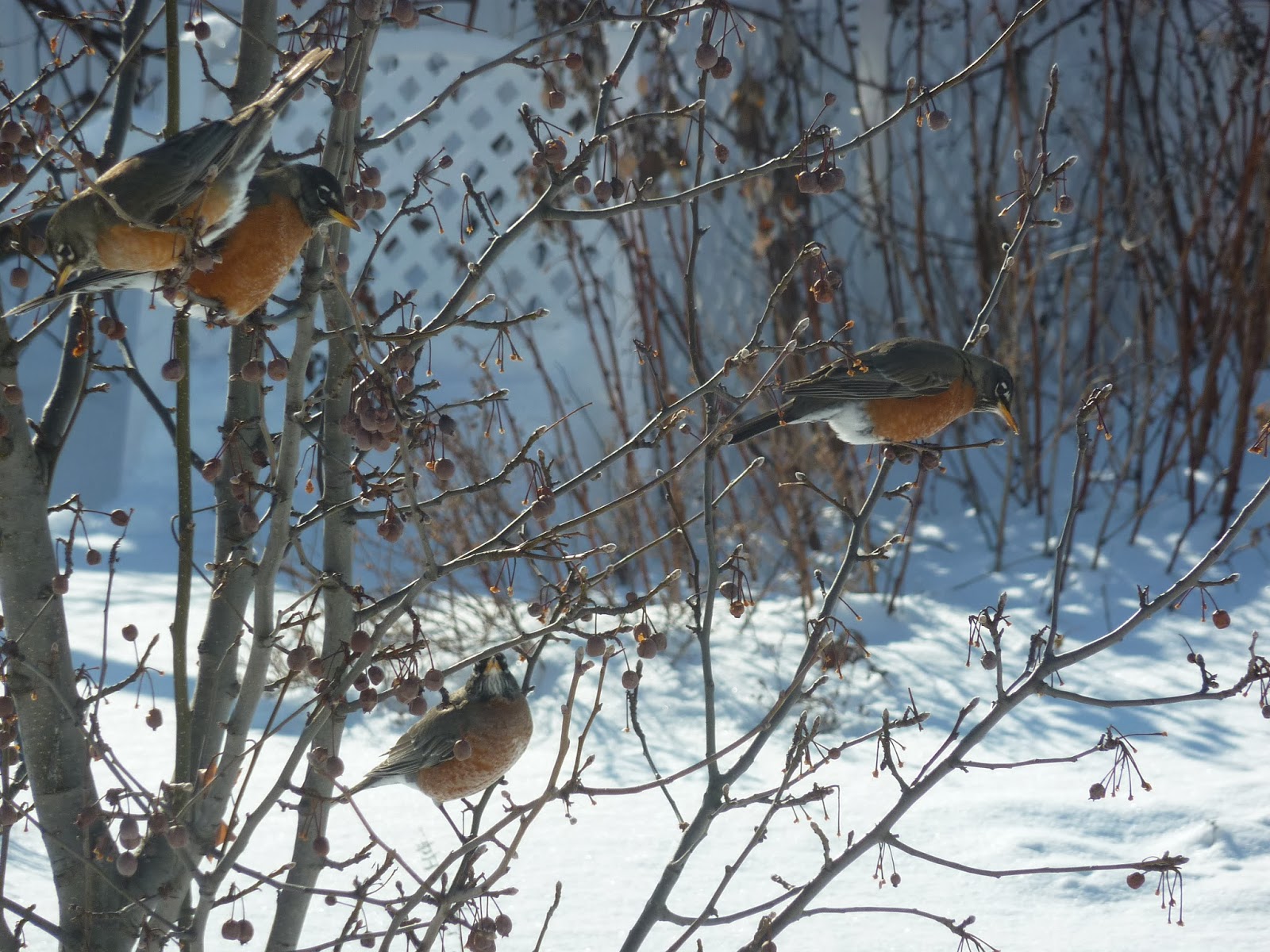 No birds ever came to eat my bird seed that I had put out but I looked later and there were so many of these birds in that ornamental pear tree!  They were eating those little "pears" that had dried.  What a feast they were having!  Now I am convinced they are not Robins!! LOL  But can someone tell me what they are???  Could they be a Grosbeak or a Towhee?????
at February 10, 2014 23 comments: 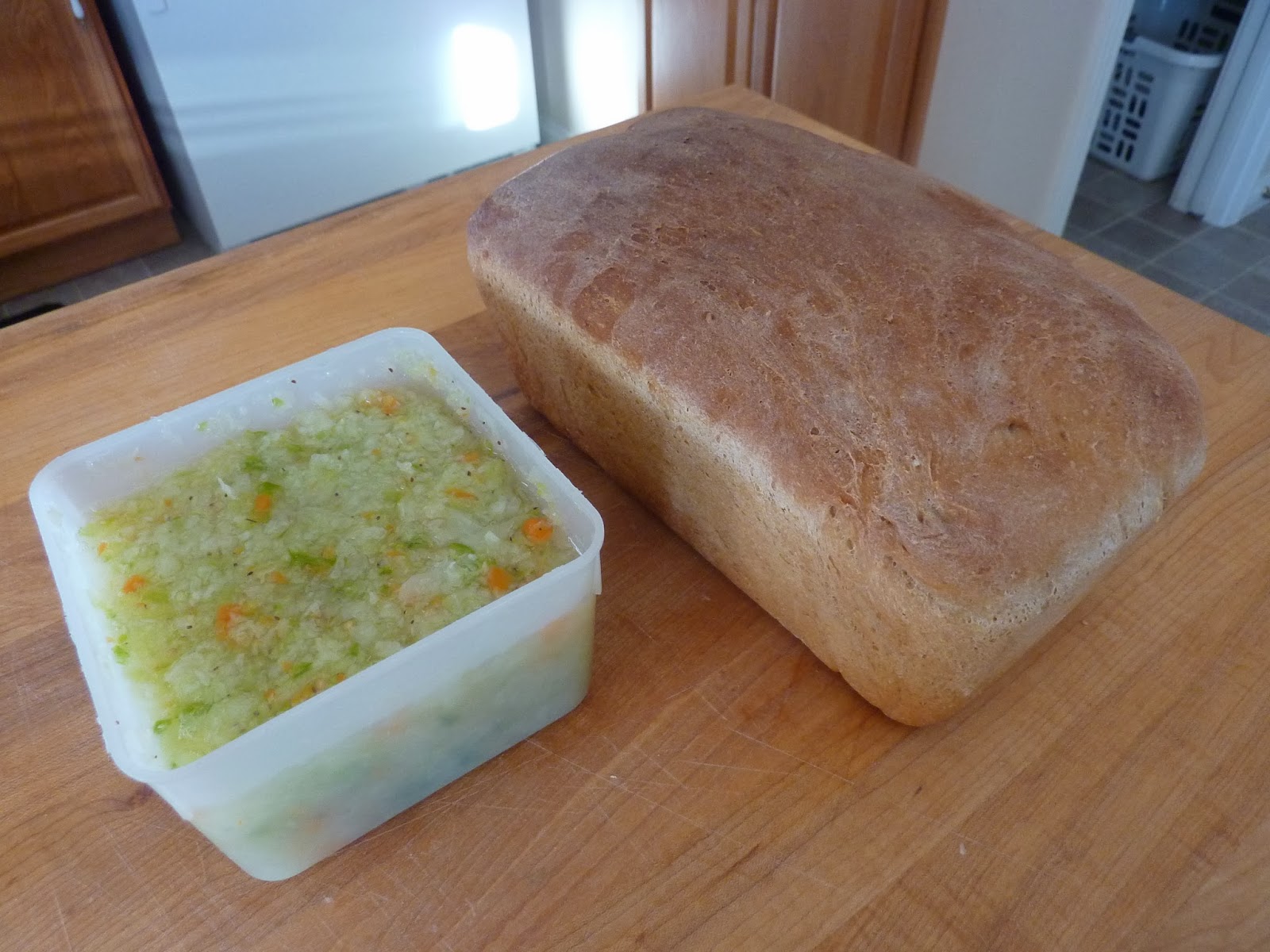 Using Cole Slaw from my freezer made from cabbage I grew!  In the mood to bake bread a couple times lately!  That's a good thing! 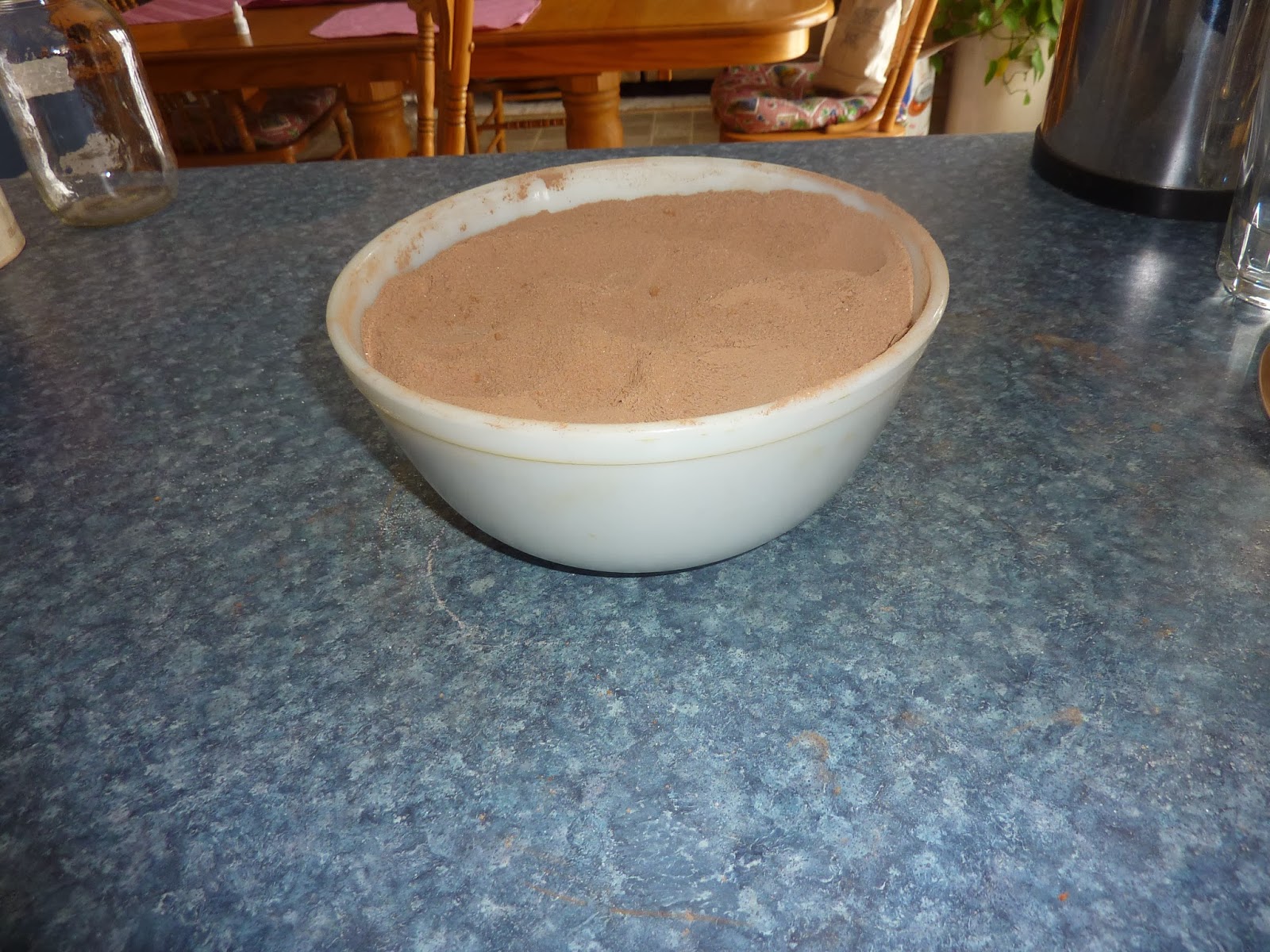 This is a dry brownie mix that I made up to have on my shelves.  No sense in buying brownie mixes when you can make them yourself!  I made up a batch of brownies yesterday from the mix and baked.  Very rich and yummy!  No one will lose weight with these! 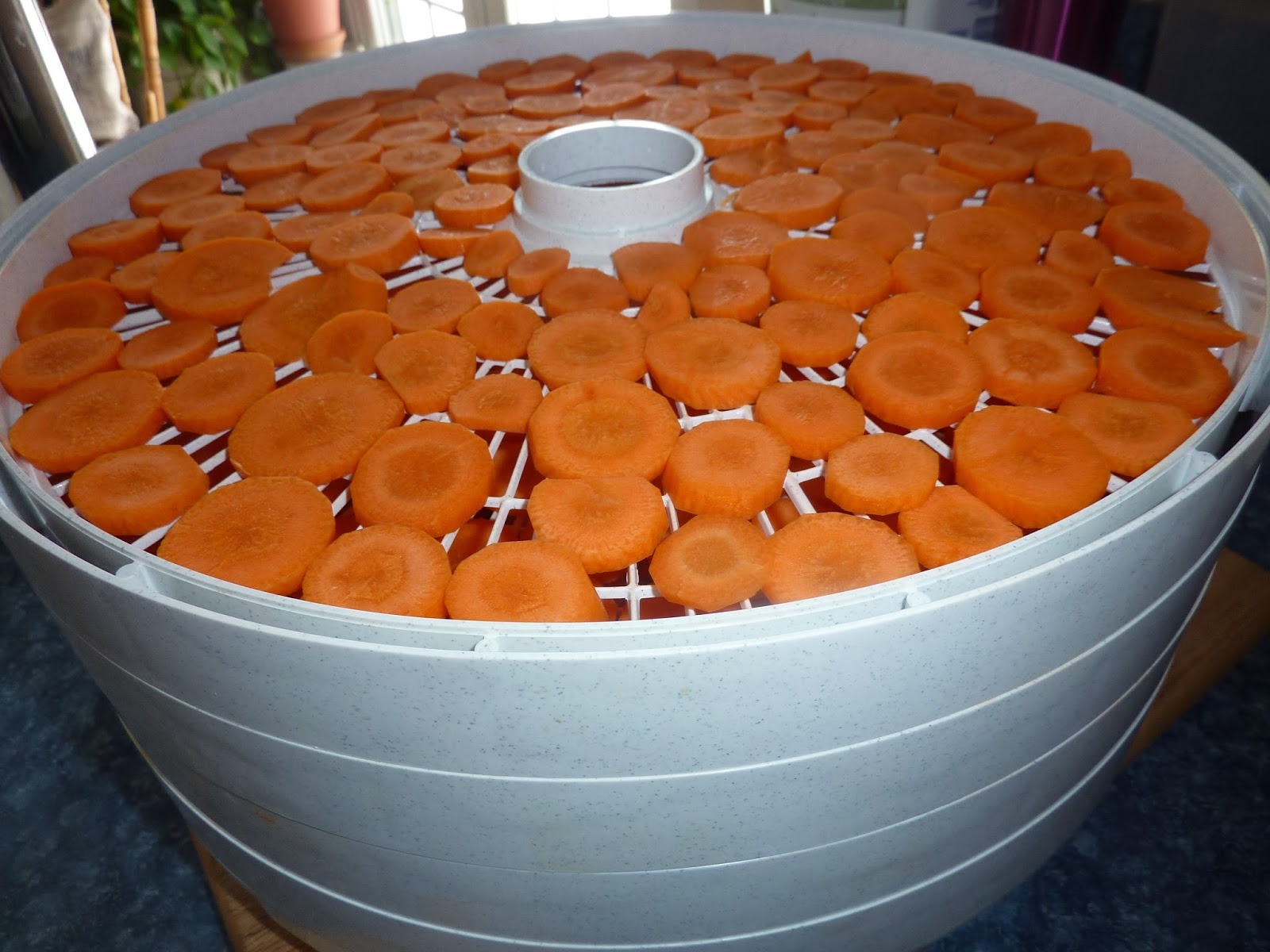 Four trays of carrots in the dehydrator ready to dry! 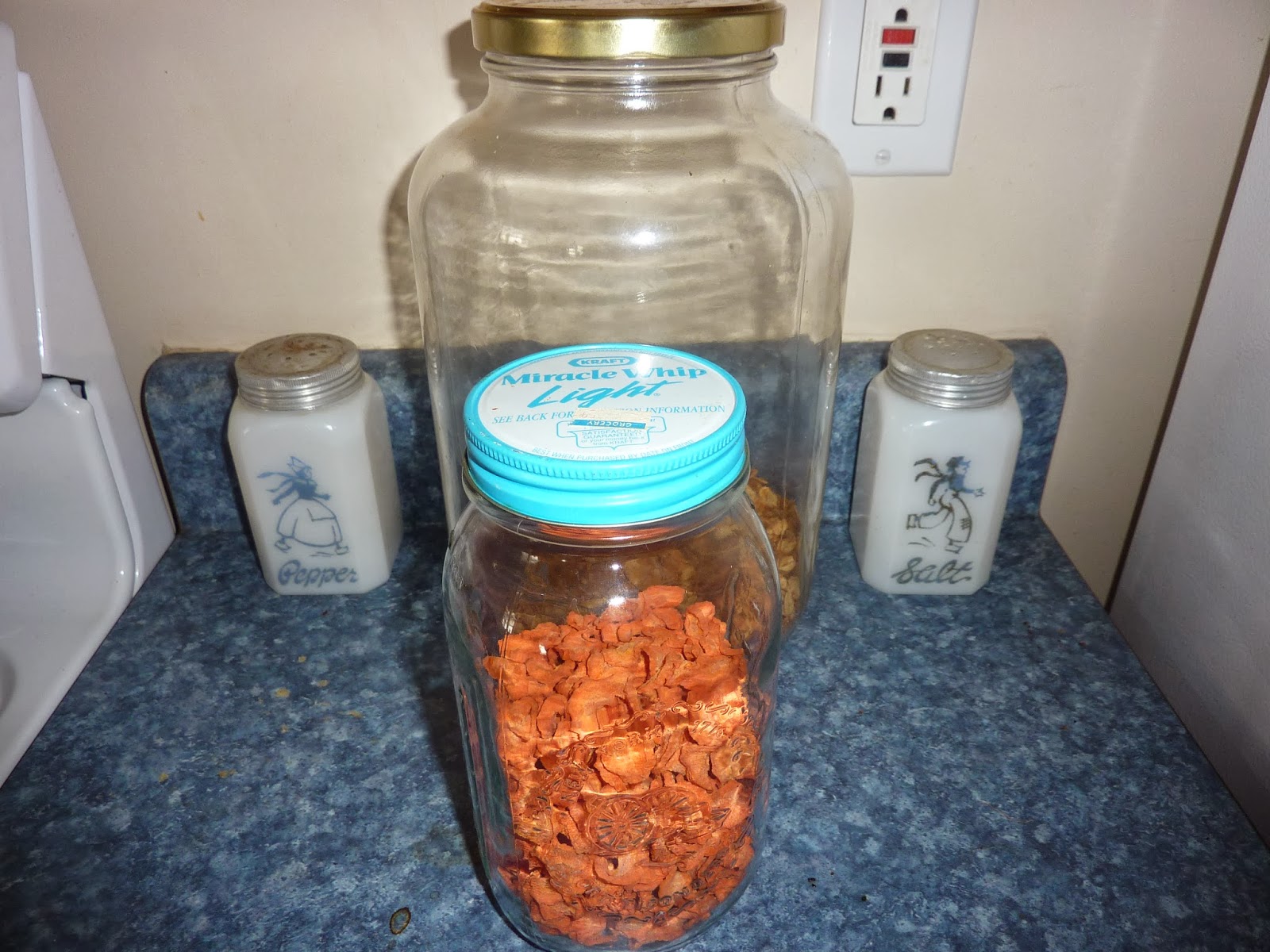 And this is what four trays of dried carrots look like in a quart jar!  I have never done this before but want to add them to soups.  I think maybe a half cup each time I make soup???  What do you think? 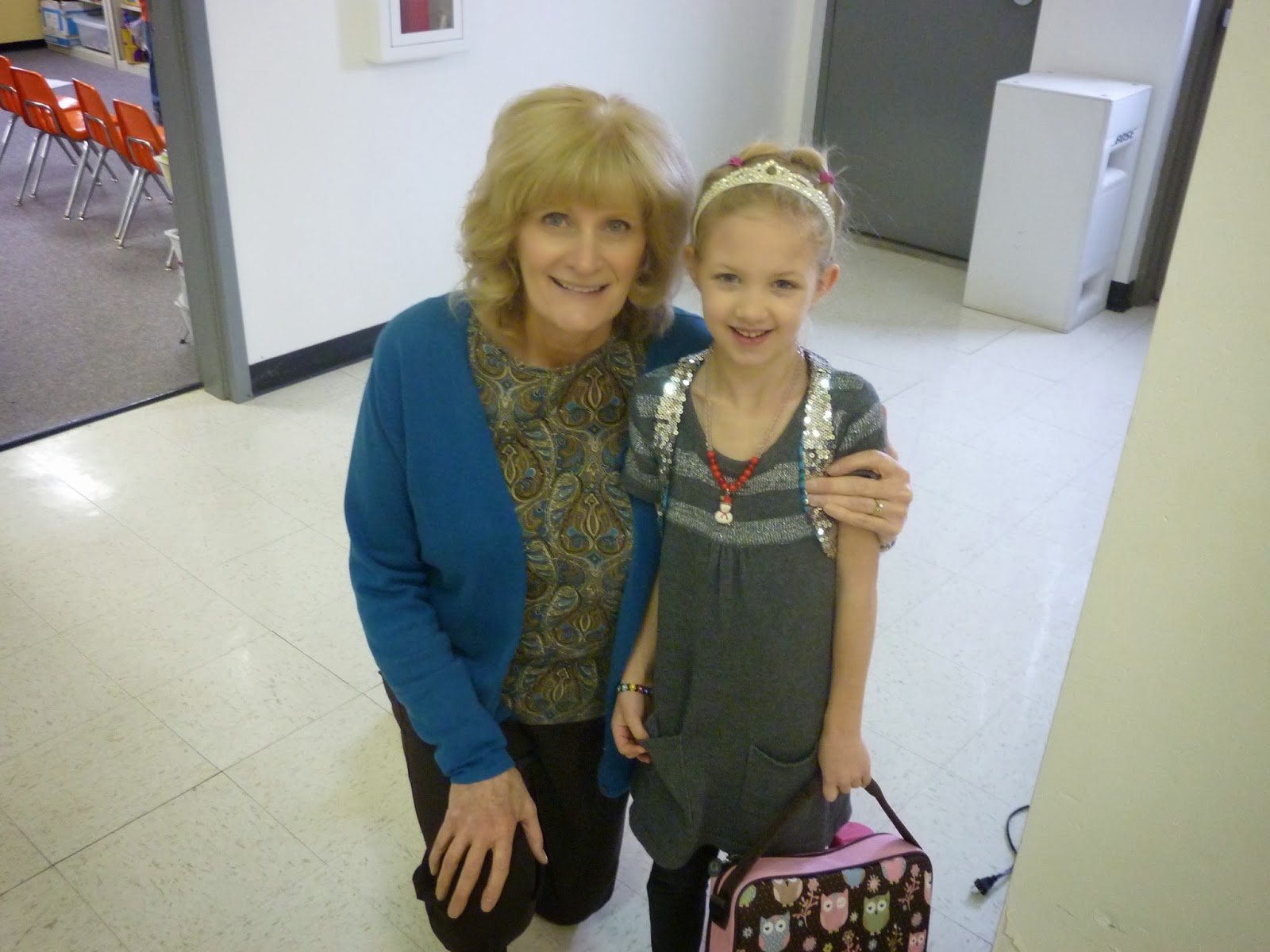 We had lunch with Gracie at school again.  This is her with her teacher. 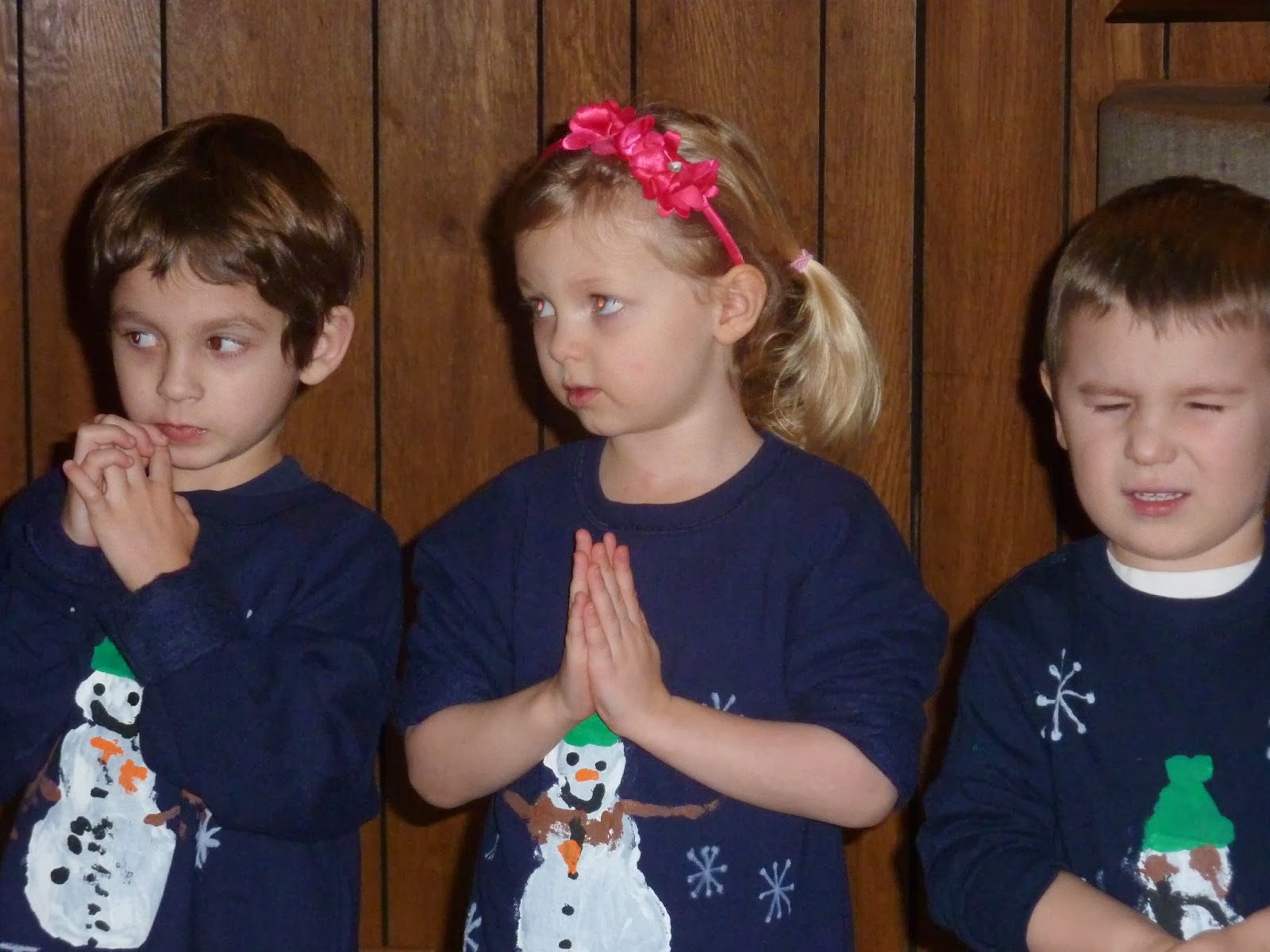 We went to Cali's preschool Winter Sing.  It was so cute.  The teacher did such a great job.  Here she is participating in one of their songs.  The kids painted the snowmen on their sweatshirts.  What a joy it is to be able to see the "Littles" in their programs! 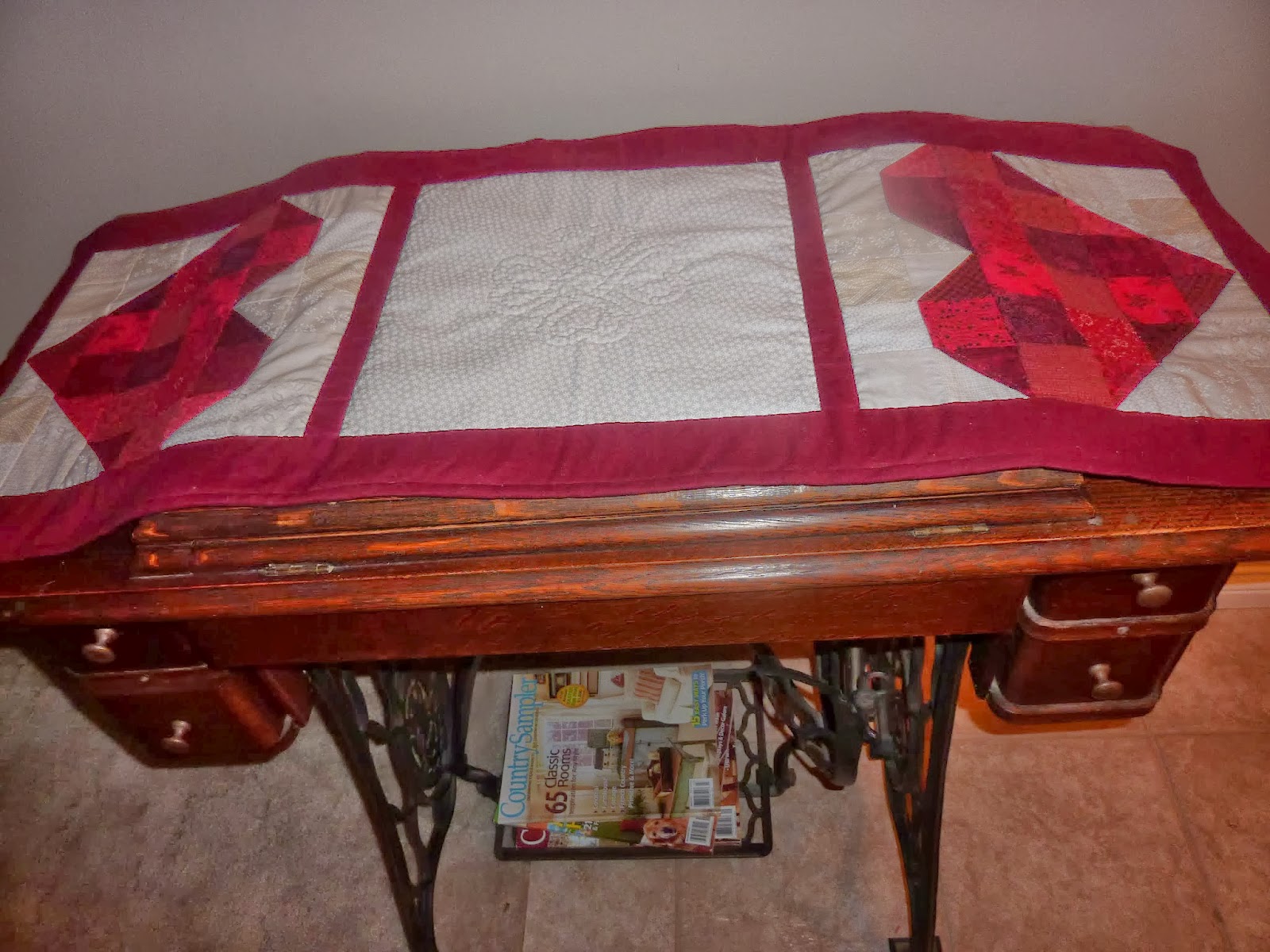 Well, finally!  A finish!  This is the second Valentine runner done!  Yippee!  I started two of these a year ago.  They look more burgundy than the picture shows.  The middle doesn't show up but there are hearts quilted in there.  Slow and steady wins the race!!!  I am slow but not very steady and that is why it has taken me so long! 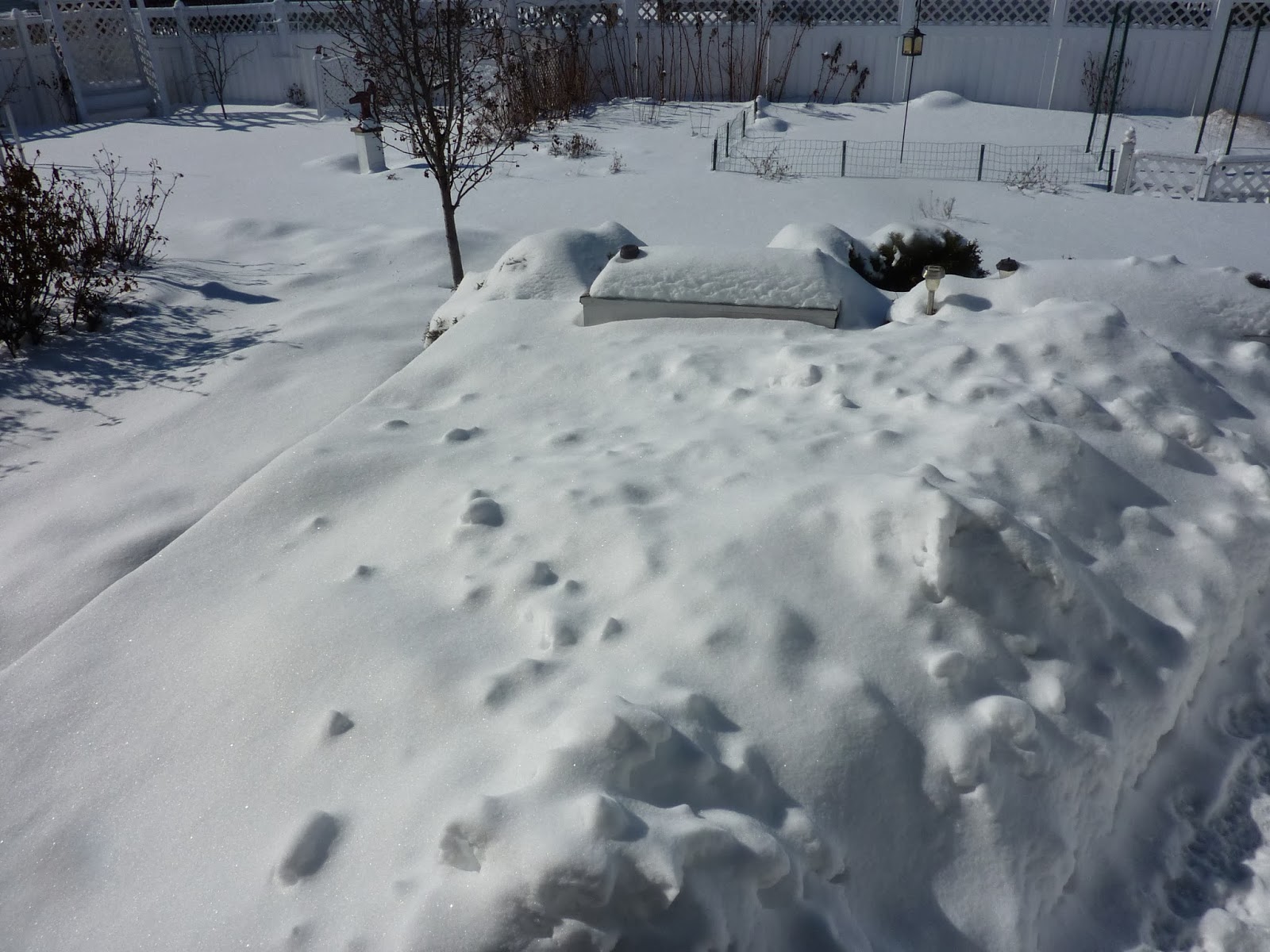 I don't want to discourage anyone but I don't think I will be doing any gardening around here very soon!  More snow to come!

Progress in the Courtyard!

It was so nice to look out my bedroom window this morning and see the Clematis blooming instead of a pile of snow.  It is a rainy day agai... 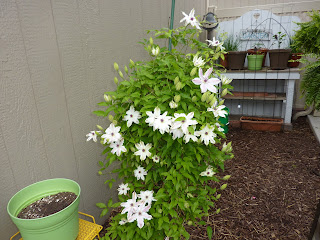 Cozy Thyme Cottage
UPDATE - APRIL 6TH,2022 Well a lot has happened since I wrote our original Bio.. Some good and some not so good. First of all we have moved from our Porter, IN. location to Valparaiso IN. which is about 10 miles south of Porter. Why you ask? As we have aged our health problems have increased and we just couldn't keep up our home and yard. So we built a new home in a subdivision where they take care of all outside work except for our small courtyard which I have filled with elevated gardening boxes so I can still get my gardening fix. Those are on our cement patio. On what little ground I have left I have planted raspberry bushes, rose bushes, and assorted plants. I have also been using grow lights for my kitchen garden to get a jump on the season. We also have some a new addition to the family in the form of another great grand child which is a boy Camden added to our two great granddaughters. We also have had a loss in the family when our cocker spaniel "Coco" passed away. We now have a beagle that turned 1year old this week. She is a rascal! I no longer play the flute so gave it to my granddaughter who is in band, however I still tickle the ivories on my piano.

You can replace this text by going to "Layout" and then "Page Elements" section. Edit " About "